Pascal Decroos was a special journalist with special ideas 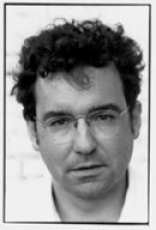 Pascal Decroos was born in Ostend (Belgium) on 20 April 1964 and died in Brussels (Belgium) on 2 December 1997. Pascal Decroos is the exponent of a new generation of journalists. Someone with a passion for journalism and committed to the case of the weaker in our society.

His director training at the RITCS.
In the middle of the eighties Pascal Decroos takes a director's course at the RITCS in Brussels. In 1988 he starts to work for Jambers TV Productions, producing items for the current affairs programme Telefacts (VTM).

His own production company which specialises in special reports and documentaries.
From 1989 until 1993, Pascal Decroos worked as freelance journalist and produced items for television programmes such as 'Het Ei van Christoffels' and 'NV De Wereld' (VRT, TV1).

This provided the experience and know-how to start his own production company. Together with Ludo Poppe he sets up the Kanakna Documentary Production Company in 1993. The company's documentaries focus on the consequences of war and exploitation and which analyse the hidden problems of modern age. But above all, it portrays people from a special angle. We vividly recall universally relevant items such as 'The servant girl and the diplomat' (1997): about a girl called Hanufa, abused as a child and now trying to trace her parents in Bangladesh. Or the memorable Panorama documentary 'Blood on the meat’ (1996), for which Pascal had to go undercover in the bloody world of the meat mob for a whole year.
In the summer of 1997, Pascal Decroos assists in the production of the first Flemish docusoap: 'Life as it is: camping', an often touching and poignant series of reports of everyday life on a camping site.

Creed of a special journalist.
In the course of his professional career, Pascal Decroos earns himself the reputation of being a critical, inventive television journalist. His creed is: do not let yourself be carried along the stream of superficial news, but submerge. Do not content yourself with drawing the obvious conclusion, but investigate and probe until you find the truth.